Foam rolling different muscle groups can help to relieve feelings of tension, discomfort, and pains – often associated with DOMS. While the current scientific literature debates whether foam rolling leads to any objective advantages for recovery, it feels good and poses no risk when performed correctly, so it can provide a great method to add to your recovery! We’ve compiled our favourite foam roller exercises to help relieve tension and pain for a full-body session.

For each exercise, you should roll the full length of the muscle in the same direction of the muscle fibres. If you reach an area of tenderness, keep the pressure on it for around 30 seconds before continuing to roll the length of the muscle. This effectively uses a massage technique known as “ischaemic compression”, essentially limiting the blood supply to the muscle to force tight spots to relax.

The tibialis anterior muscle is on the front of the lower leg and is responsible for movements such as pulling up the toes, otherwise known as dorsiflexion.

To help improve the range of movement available at the hip and knee as a result of the quadriceps flexibility, you can spend a few minutes rolling out the quads before you begin exercise.

As the quads are made up of four different muscles, you can rotate your body to target each muscle, with the vastus lateralis on the outside, rectus femoris down the middle, which sits on top of the vastus intermedius, and then the vastus medialis on the inside. 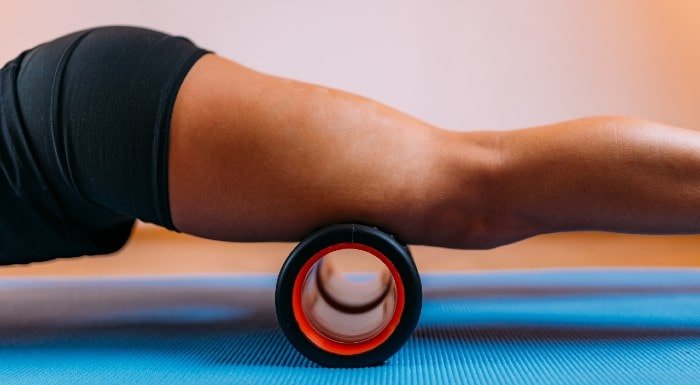 The hamstrings are made up of three major muscles which run down the back of the upper leg from the bottom of the hip, down to just below the knee joint.

There are a handful of muscles located on the inside of the upper leg known as the adductors, responsible for movements that bring the legs together (hip adduction).

The Iliotibial (IT) Band is a long and fibrous fascia structure that runs on the outside of the leg, from the front of the hip right down to below the knee. A tight IT band is common in runners or cyclists as a result of overuse and can cause knee pain. At the top of this ligament is a muscle known as the tensor fasciae latae (TFL), and trigger points here are frequently the cause of tight IT bands. 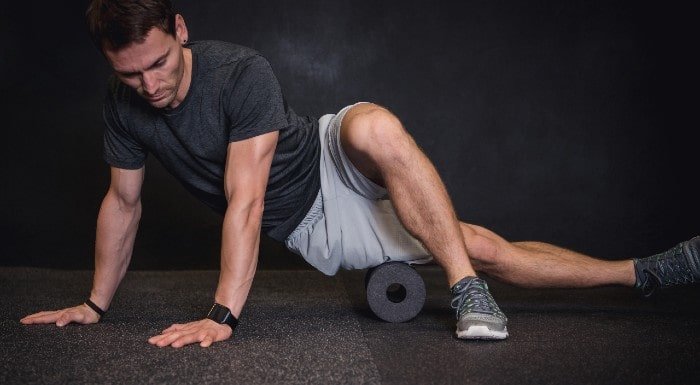 Due to its location, a tight piriformis can irritate the nearby sciatic nerve, which may cause pain or tingling down the length of the leg, so it is worthwhile taking some time to check the piriformis for trigger points.

There are a lot of muscles in the upper back, ranging from the large trapezius, which are the closest to the surface, through to rotator cuffs, which are relatively deep in the structure.

If you want to target particular muscle groups such as the traps, then you may need to roll across the back rather than up and down due to the differing angle of the muscle fibres. 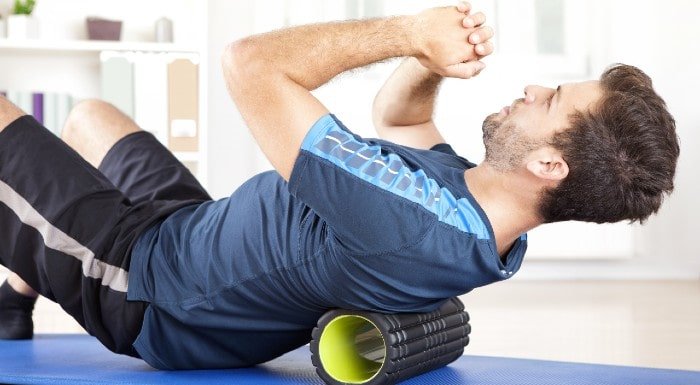 The lats are another large muscle in the back worth rolling out before exercise. The latissimus dorsi originates on the lower to mid-spine and runs under the armpit to attach to the front of the humerus. 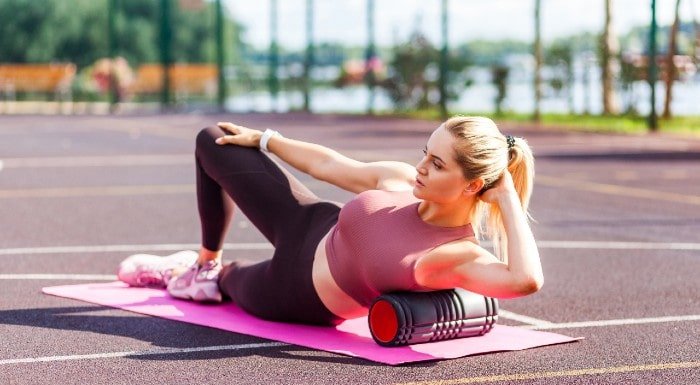 This article demonstrates just a handful of foam rolling exercises you can integrate into a foam rolling routine before training to improve range of movement, or after training to help reduce DOMS.

For smaller muscle groups, you may be better using a smaller rolling tool such as a hockey or lacrosse ball, which will allow you to be more accurate with the pressure applied. Foam rolling is expected to be uncomfortable but not painful, you can increase or decrease pressure accordingly by supporting your bodyweight though the arms and legs.

Roll out your yoga mat and discover the benefits yoga has to offer.

Find Your Flexibility With Composure 2.0 | Made For Yoga

A deep dive into what makes this range Fit for Purpose.

Here's how to master your 5K.

Scott developed a passion for sport and performance through competing in long‐distance running and bouldering prior to attending university. Scott’s academic achievements include a BSc honours degree in Sports Therapy and an MSc degree in Strength and Conditioning. He is also a member of The Society of Sports Therapists and CIMSPA. Previously, he has worked with amateur and elite athletes, ranging from university sports teams to elite rugby league athletes and Team GB rowers. He currently works with various gyms in developing and delivering training programmes for amateur athletes and gym‐goers. While passive treatments remain in his arsenal as a Sports Therapist, Scott uses his skills to promote physical activity for combatting obesity, lower back pain and other sporting injuries, and simultaneously providing programmes for athletic development. Being a recent graduate, Scott strives to gain experience wherever possible, offering advice and sharing knowledge along the way. He believes it is important to practice what you preach, so in his spare time, Scott practices Olympic Weightlifting and enjoys being active outdoors in all weathers, although he still believes it is important to make ample time for social activities.

What is D-Aspartic Acid? | Benefits, Side Effects & Dosage

What Would Happen To My Body If I Gave Up Caffeine?

How to do Dumbbell Flyes | Benefits & Technique